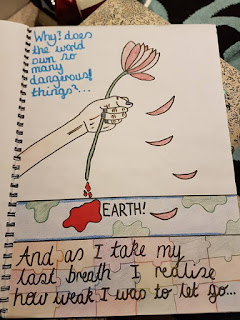 So this is one of those photos I have been very reluctant to share before due to fears of judgement or criticism but actually this was honestly how bad things were feeling at the time. I think its all very well and good when people imagine depression, bipolar or BPD as feeling sad or down, that's not what it feels like at all. It can be hard for anyone who hasn't felt this way to truly understand the misery it can cause, I was lucky to have had help so young as there are many older people who unfortunately don't receive help or treatment and many get lost in the system.
Anyways, more about the picture itself. The quote at the bottom about being weak I seem to remember that coming from my parents. This photo truly represents a part of the struggle I had with my parents at the time. Its got to be extremely hard to have a child with barely any experience of the world want to leave it so young. As any parent would they would try to do anything to make it seem as if being strong was being alive and being weak was not. At the time my moods were all over the place, reality was a bit of a blur and I think in a way I tried to make suicide seem like this beautiful, peaceful experience, when in fact its the complete opposite. Anyone who has been so out of touch with reality will understand further what I mean. Looking at this picture it looks pretty and clean, which is completely conflicting.
For anyone looking at this picture it must appear as very bazar, which, to be honest, is what I sort of see myself. Looking back at it as a pretty stable human being I cant quite understand what exactly I was trying to communicate. But I think that in itself is exactly how I felt at the time.
Confused, scared and out of touch.

Posted by Katherine Pey at 14:50 No comments: 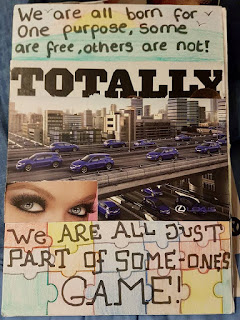 
This is around the time when my mental health started to spiral. Trying to juggle school, dance, a social life, my exams and my own health wasn't at easy as I clearly thought it was. This would be a time that doctors would now call a manic episode. It made everything go 100x faster and paranoia and slight delusion would set in. I became paranoid of the world around me and as you can see in this picture/collage that I made at the time I was very clearly feeling high paranoia. What I like about this photo is the fact the background is a puzzle piece. I think looking back this represented me holding my life together. Everything felt like it was coming apart and I was barely forming a glue to keep it all together. Another thing I find quite striking is the fact that all the cars in the collage are the same type. To me this feels really intense and if you had happened to see this in real life I can guess that everyone would feel a little intimidated. Unfortunately being in this state of mind has major effects on everyday life. Due to paranoia school started to become difficult. Being there was fine, it was mainly the journey back and fourth from it that I found hard. I had started to see CAMHS at this time, who too encouraged my art, it gave them a better explanation of my mind than my words seemed to do. When I look at this picture I notice how colourful it is. Being in a manic state felt a little like the whole world had just got higher in saturation. Suddenly everything was very bold and very striking which I reflect in this picture. It wasn't a happy state though, which I think is a major misconception with Bipolar. The two eyes in this picture are very direct and I think this was mainly aimed at my feelings of being watched. This could be anyone from doctors, family or friends, just worrying constantly that my behaviour was being judged.
Overall this picture was my expression during a time of heightened sense. Although when I drew it I don't recall thinking about it and planning the picture but now I look back to see how well it reflected my feelings at the time.
Posted by Katherine Pey at 06:57 No comments: 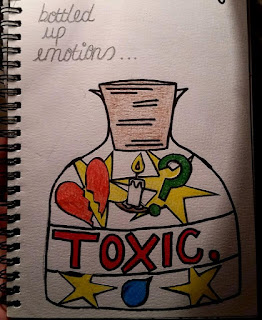 This was one of my most colourful drawings and I think I linked that to how explosive and toxic my emotions were at this point. It is difficult when you are still in your early teens, trying to figure out yourself and also changing on a daily basis. I think myself and my family put my extreme changes in moods to just being a teenager, however, that wasn't quite the case. I constantly felt like I was trying to contain my emotions and scared I'd act out and either be too happy or too depressed and others would think I was weird. I remember listening to my therapist telling me to not worry about this and just allow myself to feel but the idea of it was too scary.
Looking at this drawing now I can see that I was the jar and the word toxic was my label. Everything felt so out of control that I felt I needed to have full control, which wasn't quite realistic (for anyone). I was going through the usual teenager issues of boys, life, growing, friends but I also had this little destructive cloud over me that seemed to avoid being in reality and more in my own little world. What I like about this drawing is that it doesn't look very negative, it isn't black and white and smudged. Its very bright and done in a cartoon type way and I think this expressed the way I felt as if I was in a TV show and constantly being watched and judged. I wasn't really depressed at the this time, it was more that I was struggling with separating reality from my own head. It was a very scary time when I look back now as a 21 year old but at the time, due to the lack of reality I don't think I even felt much at all.
Looking at this now it looks very confused and ultimately very lonely, contained in a jar to avoid effecting anyone else. I think this is how I felt for quite a while at this age.

Posted by Katherine Pey at 12:11 No comments: 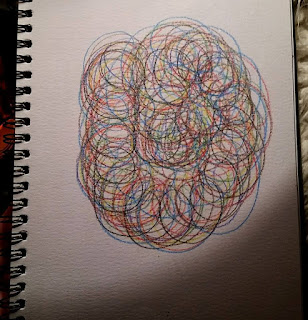 So starting at the very beginning (my pictures get more elaborate, i promise!) was a scribble of a drawing I put together in retaliation to the anger I felt in my first few weeks of CBT. Being asked questions about your past and thoughts on the future is extremely hard to answer at 13 years old. Which is yes, unfortunately when the start of my mental health issues began. An age when you are meant to be starting secondary school and going through the 'terrible teens' was not the ideal age to be spending an hour a week talking to a child therapist. However, I was very lucky to have had such a good support team in place.

This picture was after coming home upset that I couldn't find the right words to describe how I was feeling and my anger at the therapist for not knowing what was going on my mind (which was quite frankly, an impossible task).
I came home and cried and my mum, who felt she couldn't help, decided to give me a notepad. At first the idea of drawing my feelings seemed silly and useless. However, when she eventually left the room I gave it a secret go. This was the product. Not exactly a Picasso piece but it was surprisingly releasing just to grab a bunch of coloured pencils and scribble. Not having to design something specific just simply seeing what came out.

After this simple, yet explosive drawing, I was hooked. Although there was still a long way to go into recovery, I had found my means of communication.

A little bit about me

Katherine Pey
For many years I struggled to explain what was going on in my head, my views of the world & ultimately, what was preventing me from engaging in life. It wasn't until my mother got frustrated and asked me to simply draw my emotions that I learnt the true the power of Art. After years of drawing and painting, some in a positive mindset, some in a negative, I decided to share. I created this blog with the aim of inspiring anyone who has ever felt that they weren't good enough, judged or simply classed as 'mentally unstable'. My honest advice, from someone who has come out the other side is, if you cannot explain it simply create it. - You have nothing to lose by trying.